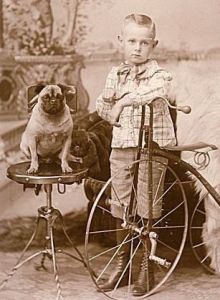 Just the other day I was biking along in a small town, and I heard the shrill cries of a child nearby. The hysteria silenced all other sounds. As I got closer, I saw that the cries were coming from a boy about five- years old with blond cherubic curls spilling out of his red helmet. His face was smeared with tears. There was an elderly man with a cane asking him if he was okay. “I lost my parents. I lost my parents,” he sobbed.

“Thank goodness for this man,” I thought. Talk about a guardian angel. The boy hadn’t been alone for a second, before a kind stranger came to his aid. But what if the boy was afraid of this man? What if his parents had taught him about “stranger danger,” as well-meaning parents should. If so, he was in the midst of a true moral dilemma.

Suddenly I was worried about the man who was offering to help him, what if he was a pedophile? The media teaches parents to tell their children if they are ever lost to ask a woman for help. Now we all know that all women aren’t good. Maybe the child’s odds are just statistically better if he/she asks a woman for help. Right then, I decided that I needed to help too, that this man should not be the only person in charge of this little boy. And just as I was thinking that a young couple in their twenties appeared out of nowhere and walked right up to help the little boy.

I took a deep breath. What a relief I thought. What a beautiful picture of kindness. Three strangers on a splendid summer day, two walking on his right, one walking on his left. They headed towards the center of town. Whatever plans they had made and wherever they were going before they discovered the lost boy were on hold. Clearly, they had decided that doing the right thing to help him was the only choice.

When you’ve just gone into a ditch on the San Diego County freeway, Thomas Weller is the stranger that you’ll wish for. He cruises the freeway looking for people who need help and he doesn’t get paid for it.

NPR featured him on StoryCorps recently and his story was so inspiring that it moved me to tears. Weller knows how important a stranger can be in a person’s life.

His dedication to others began with his own childhood story. His mother told him not to drive his car during a blizzard but he did it anyway and ended up in a snow bank. If it hadn’t been for a kind stranger that stopped to help him, he would probably have frozen to death.  That was back in 1964. He’s been called an “angel” countless times by many of the people he’s reached out to. He doesn’t consider himself one, but I do.

Listen to the interview and be grateful for people like Thomas.