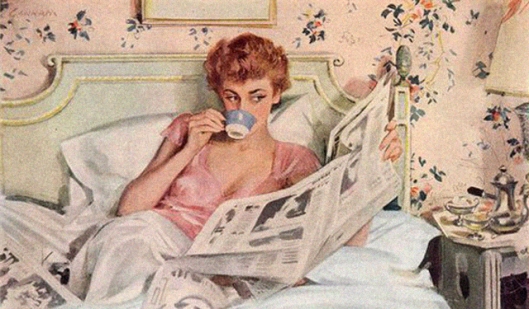 Last night, for the first time, I tipped a clerk at the front desk of my hotel.

I was going to be booted out in the morning because the hotel was all booked up. I needed to stay an extra day, but there were no rooms available. So I went on the Internet in search of some assistance and support. I typed in “how to get a room in a fully booked hotel” and learned that if you find a helpful clerk, it’s important to show your appreciation with a tip. I had no idea! Now I know and I like being in the know.

Wouldn’t it be great not to have to schlep my stuff twenty minutes down the road to the next look-alike hotel in the chain? Armed with this new information, I marched to the front desk and politely asked the young male clerk with the nerdy glasses if any incoming guests had cancelled.

Courteous? Yes. Useful, no. The hotel was clearly packed, but aren’t these front desk people supposed to be clued-up or clued- in? This was not exceptional service. My tip stayed in my pocket.

That evening, much to my joy, he was not still at the front desk—he’d been replaced by a friendly young woman with hipster black-rimmed glasses. Up to the desk I went again, pasting on my best confident smile. “Did any rooms open up for tomorrow night?” I asked her. “I’ve been hoping and hoping.”

“No,” she said, smiling, and reached for what appeared to be a hotel register. “What’s your room number and name? I’ll write it down.”

Bingo! I knew that I had made a connection. She actually gave a dam and had taken down my information, so I could put new tipping training to the test. The Internet article said to give between five to twenty bucks. This wasn’t New York City, so I handed over a nicely folded ten. She took it happily but with no surprise. As I walked away, I was kind of wishing that I had given her five bucks instead, because what if she didn’t score me a room? But the risk, I decided, was worth it.

All these years, I had known about tipping the bellhops, the housekeepers, and valets when I stayed at a hotel, but this new trick of tipping at the front desk had me returning to my room hopeful.

The next morning, when I woke up I turned over, crossed my fingers, and dialed the front desk.

“Good morning,” said a chipper voice. “May I help you?”

When I asked if a room had opened up, the desk clerk replied quickly with enthusiasm. “Yes, we have a room for you and you don’t even have to move. Just come down when you get a moment to get rekeyed.”

“Hallelujah, hallelujah! Figaro!” I sang as I jumped out of bed.

While I peacefully drank my coffee in the hotel lobby, I thought, Wow, this is so much better than packing up the toothpaste, wheeling my suitcase over my foot and then grunting as I lifted my things into the trunk of my car. That was definitely the best ten bucks I had spent in a long time.

I’m in a short line at the bagel shop waiting for my pumpernickel bagel to toast. Behind me, a man in his golden years is breathing down my neck, hoping to get his bagel before I get mine, even though I’m ahead of him in line.

He wants it now. Why does he think that his bagel is more important than my bagel? We live in a hurry up, quick fix culture and this neck-breathing can be the unwanted byproduct. Here he is, past his prime and yet he has learned nothing about patience.

Yes, it’s wonderful that there are many things we can get quickly, like a hot cup of coffee on a cold day, but when that convenience breeds impatience that translates into a stranger in my personal space, I can get very irritated. I want to throw up my hands and say to him, “Back off, Mister.” But I don’t; it wouldn’t help any.

I hear a thud and see my bagel drop out of a large industrial toaster.

“What would you like on it?” the curly-haired young man behind the counter asks.

“I’ll have a little cream cheese with tomatoes.” I paused and then added, “And some capers, too.” The capers just about took the fire-breathing dragon behind me over the edge—capers are small and precise and require more detailed work to organize on a bagel. The man got even closer to me and tapped his foot.

I pulled my charge card out of my wallet to pay. Then it was finally his turn.

“How are you today, sir?” the cashier asked him.

“I’m having a terrific day,” he said.

“No, you’re not,” I whispered to myself, as I walked towards my car. You can’t be “having a terrific day” if you can’t even wait for a bagel. That means that everything else is passing you by.

“Hey,” the waitress said, smiling at me. I had barely walked in the door. She looked around the restaurant, as if she had just noticed that it was pretty empty. “I guess you can sit anywhere.”

It was 2:45p.m. The thing that’s great about Waffle House is that even when you go at an odd time, it’s not odd. There’s always someone there or someone about to come in. You can always sit at the counter and strike up a conversation.

“So, do you know what you want or do you need a little time? Do you want some juice or coffee?” the waitress asked.

She had a sunny disposition. Her freckles seemed to match her friendly demeanor. She had fine straight brown hair to the top of her shoulders and warm delicate light brown eyes. I guessed her to be about nineteen.

We started talking because she wasn’t busy.

“I’m glad it’s slow now,” she said, “because it gives me a chance to think about this paper I have to write for my English class. You know, I’m taking four classes and it’s all good because I work here in the morning five days a week and then I have three hours off in the afternoon before my classes. Two of my classes are online, which is great, and two are on campus. It’s a good balance. It all works out because I get to see my fiancé in the late afternoon before my classes.”

I was thinking that someone else might complain about having to work five days a week and take four classes and try to save some money for a wedding and college, but instead she was grateful.

What is happiness? This is something I’ve been pondering lately. Why is it that some people waste their time complaining and holding grudges while other people just make the best of what’s handed to them?

An elderly couple got up slowly from a booth. “Bye,” they said to the waitress.

“I’ll get the door for you,” she said and ran around the counter to help them.

“Are they regulars?” I asked her.

“Yes, they come in here a couple times a week. They’re so cute.”

“You know,” she said as turned to the manager, who had just walked in, “Jack didn’t come in today. I hope he’s okay. Maybe I should call him. Maybe he’s sick.”

“He’ll be fine,” the manager said. “Let’s worry about it if he doesn’t show up tomorrow.”

I looked at the waitress. She was talking to a truck driver in the corner booth. She poured him a coffee. They said something to each other. She laughed and then he laughed. She’ll do just fine in her life, I thought. It’s such a pleasure for everyone to spend time with someone who has a sunny disposition.

Listen to Aunt Bee on The Andy Griffith Show

Error: Twitter did not respond. Please wait a few minutes and refresh this page.